Beware The Bubble: August Jobs Prints As Expected, But Other Concerns Abound

05 Sep Beware The Bubble: August Jobs Prints As Expected, But Other Concerns Abound

The seasonally adjusted unemployment rate ticked down 180 bps to 8.4% from 10.2% in July, but is still 4.6 percentage points worse than it was last year. Average monthly, three-month, and six-month jobs creation for June, July and August were as illustrated below. 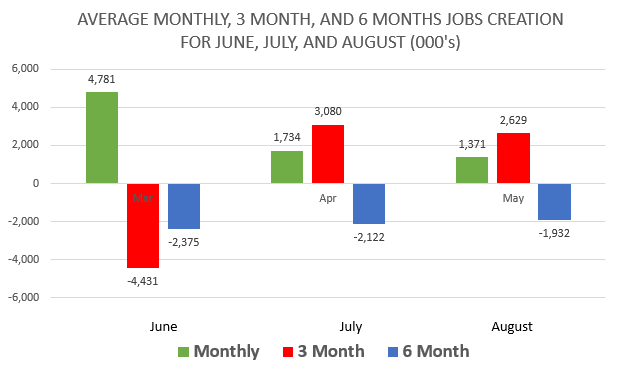 The last six months of the shutdown have disturbed what had been a mostly optimistic economy. While the pandemic situation has improved, there remains discernible fear among the elderly and those with comorbidities, as well as parents and teachers. For others, concerns remain about a “second wave”, such as is underway in Spain, the risks going into flu season next month, and the risks associated with transmissions from school re-openings. We remain in a blind spot for the time being, and we remain circumspect. We continue to have four overriding central economic concerns from COVID-19:

The “black swan” widespread pandemic of COVID-19 hammered the US economy harder and faster than we ever could have imagined, and we are in a depression, defined as a decline of 10% or more in GDP in 2020Q2. This depression has altered much of how we did “pre-pandemic” business and surfaced a number of fault lines in society that had been hidden from view for some years. As we explained in our 2020Q2 GDP report, we continue to doubt a “V”-shaped recovery is likely, but the “L”-shaped…um… “recovery” we predicted may be shorter than we originally estimated, depending on the course of the COVID-19 virus; indeed, it could become a “U”-shaped recovery for reasons we explained here. Keep apprised of our outlook by checking our jobs reports here on Seeking Alpha.

Let’s look at our exclusive schedule of jobs creation by average weekly wages for the August jobs report: 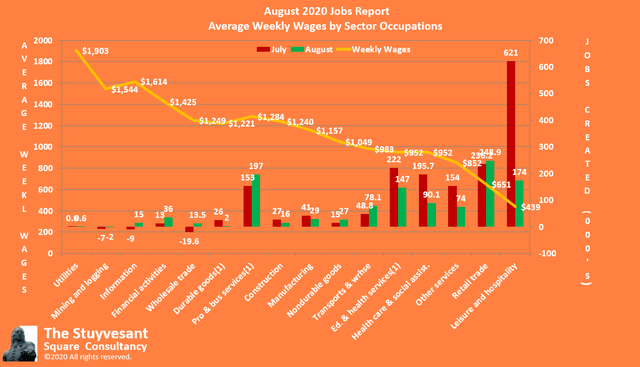 August Jobs Creation by Average Weekly Wages Source: The Stuyvesant Square Consultancy, compiled from BLS Establishment Data for August 2020. August jobs creation was more widely distributed than in July in low- to moderate-income occupations. July jobs were not so well distributed and slanted almost entirely in low-wage occupations in Retail and Leisure and Hospitality. But this is not uncommon in a recovery.

As we review economic data, please take note that the COVID-19 virus first became mainstream in the USA after December and only fully bloomed in March and that economic statistics reportage can be months behind. Data reporting for June or July, where it is available, is a far better indicator of the effect of the virus on the US economy – and whether we are emerging from its ill effects – than more lagging data from May. Later data is always better, particularly for prognostications about the future of the economy. Investors should also keep in mind that apparently “stellar” movements in their own right are, in most instances, merely a partial restoration of the status quo before COVID-19 hit. For example, a 20% increase in July month on month after a 25% decline in June isn’t “growth” per se if one buys into the Broken Windows Fallacy.

The Chinese Bureau of National Statistics data set is reported as “insecure” by our firewalls and was not accessed for this month. News reports put the growth at just 3.2% after reporting a decrease of 6.8% in 2020Q1. China reporting has always been opaque under the CCP and is often exaggerated as part of state propaganda.

Japan’s GDP declined at an annual rate of 7.8% in 2020Q2. It was 2.2% in 2020Q1 on the second revision. (Note that the calculation method was revised to accommodate data collection difficulties arising from COVID-19). We’re still awaiting 2020Q2 GDP from Japan.

Events that merit especially significant notice and which will affect investors’ portfolios will be addressed as separate articles on Seeking Alpha when they appear to be imminent or within a day or two after they occur.

Fuel prices remained above the $2.00 per gallon threshold in August at $2.272, unchanged from July. Gasoline prices were 16.07% lower than last year.

West Texas Intermediate crude oil prices continue to be battered by Russian and Saudi efforts to knock out US fracking, as well as COVID-19. They fell 2.11% from last month as of Thursday and are 26.68% lower than the same time last year.

Advance U.S. retail and food services sales for July (which are adjusted for seasonal variation and holiday and trading-day differences, but not for price changes) were $536.0 billion, an increase of 1.2% from the previous month, and 2.7% above July 2019.

This chart of advance retail sales, from the St. Louis FRED system, illustrates the warning we have tried to convey: we had a big “improvement” that put us back where we had been, with just modest growth, but it’s rather like running on a treadmill: you will have covered a lot of ground, but you went nowhere. That’s why we think GDP will print overall negative and likely in depression, down 10% or more, overall for all of 2020. The next report for retail sales for July is due September 16th. July new orders for manufactured durable goods, released August 26th, increased 11.2% to $230.7 billion.

The TSI for May, the latest available data, printed at 2.7%, coming off the June decline of -33.7, the biggest decrease since this statistic was adopted.

Debt service as a percentage of household debt was moving up again before the COVID-19 crisis hit. It actually fell in 2020Q1, presumably as credit card debt dropped as shopping did. We were heartened that people are taking home more cash from the 2017 tax cut, so that debt service accounted for a lesser percentage of disposable income. Data for 2019Q1 showed debt service as a percentage of disposable income at 9.66, the lowest level since records started being kept 40 years ago. It ran over 13% prior to the Great Recession. We expect the percentage to be higher in 2020Q2 as layoffs decimate the economy and household income, but that data has not yet printed.

As we had anticipated in June, M-2 velocity cratered to the lowest level in history with 2020Q2 GDP, given the Fed having opened the monetary spigot fully and the cratering of the economy from COVID-19.

We note these other macro developments since our February jobs report:

The Fed has made clear that it will be at the ready to maintain liquidity in the markets. And we are concerned about that policy, as described above.

Trimmed mean inflation for personal consumption expenditures, less food and energy, or “Real PCE” for the Dallas Fed is at 0.9% year on year. The real PCE price deflator, reportedly the Fed’s preferred measure of inflation, cratered further, printed at just 0.3% month on month, and just 1.3% year on year, down from 1.7% at the beginning of the year, hence our concerns about disinflation.

GDP predictions remain extraordinarily difficult in the current environment as the quantum of economic change has been so volatile, measured in multiple percentage points instead of tens of basis points. Not knowing the outcome of the pandemic, or the consequences of re-opening, our estimate requires a much wider range of values than our usual 30 to 50 bps, but we have revised our estimate for 2020Q3 to print down 3% to flat.

Note: Our commentaries most often tend to be event-driven. They are mostly written from a public policy, economic, or political/geopolitical perspective. Some are written from a management consulting perspective for companies that we believe to be under-performing and include strategies that we would recommend were the companies our clients. Others discuss new management strategies we believe will fail. This approach lends special value to contrarian investors to uncover potential opportunities in companies that are otherwise in a downturn. (Opinions with respect to such companies here, however, assume the company will not change). If you like our perspective, please consider following us by clicking the “Follow” link above.

Disclosure: I/we have no positions in any stocks mentioned, and no plans to initiate any positions within the next 72 hours. I wrote this article myself, and it expresses my own opinions. I am not receiving compensation for it (other than from Seeking Alpha). I have no business relationship with any company whose stock is mentioned in this article.

Additional disclosure: The views expressed, including the outcome of future events, are the opinions of the firm and its management only as of today, September 4th, 2020, and will not be revised for events after this document was submitted to Seeking Alpha editors for publication. Statements herein do not represent, and should not be considered to be, investment advice. You should not use this article for that purpose. This article includes forward looking statements as to future events that may or may not develop as the writer opines. Before making any investment decision you should consult your own investment, business, legal, tax, and financial advisers. We associate with principals of Technometrica on survey work in some elements of our business.