This sophisticated Dallas condo is a showcase for a budding designer 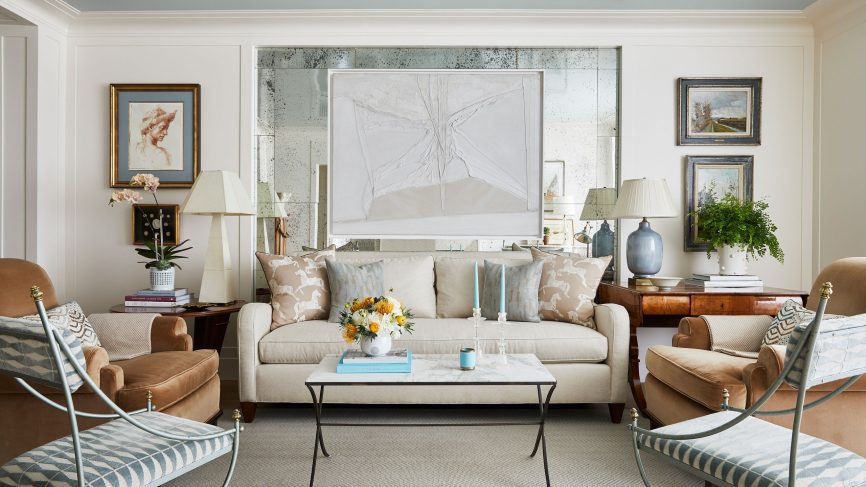 In the living room are an upholstered sofa surrounded by armchairs from Bunny Williams Home; vintage metal chairs covered in Kravet fabric; and a coffee table custom-designed by Pickering’s architect husband, Daniel Heath. A multimedia composition by Frantisek Janula hangs above

When Josh Pickering and his husband, Daniel Heath, made the decision to flee New York City for their native Texas, they knew that finding the right landing pad would be a challenge. “Our new home had to be equally [as pretty], if not prettier, than our New York apartment,” says Pickering, referring to the prewar walk-up they formerly shared in Manhattan’s Sutton Place. When he stumbled upon a condo for sale in a Dallas high-rise, it wasn’t the building’s midcentury façade or Texas-sized living rooms that drew him in, but its unexpected family ties: Heath’s grandfather was a project architect on the building in 1957, working under famed Dallas modernist Howard Meyer. “It was a fun connection,” Pickering said. That, paired with the roomy one-bedroom unit’s ability to easily transform into the blank slate needed to execute the couple’s vision, compelled them to pull the trigger.

A designer himself, Pickering spent his time in New York working under the one and only Bunny Williams. It was there he honed his know-how, taste level, and affinity for a more traditional aesthetic—all chops he carried with him to his solo endeavour, Pickering House, which was launched upon his move to Dallas. At the same time Heath, an architect, founded his own firm, Heath House.

The timing proved fortuitous, as Pickering and Heath both entered the Dallas design scene with at least one project on the books: their own home. So in went their time, creativity, and impressive batch of antiques. “It was meant to be a showcase,” Pickering says, “of both of our tastes and the work we want to do.” They took the unit down to its concrete bones. “We rewrote the plan to bring the air of a New York apartment to this midcentury condo.”

When it came to the interiors, the condo’s oversized living room was a challenge: “It was so large that I had difficulty figuring out how to furnish it,” Pickering recalls. So they imposed symmetry onto and regularised the spaces—dropping the ceiling on either side of the living room to create a natural entry space and dining nook—and to allow for a plaster crown frame. “Because of the low ceilings we had to play tricks to keep it classically proportioned, but at the same time detract from the feeling of a low-proportioned room,” he says. They installed a fireplace at a lower height and painted the ceiling a reflective high-gloss blue. Another tip from the Big Apple: Pickering embraced some of those more awkward, tight spaces. An 8-foot-square room off the kitchen was painted a cool blue and became a petite library-bar hybrid. The walls of a narrow entry were upholstered in a luxe grey velvet—a do-it-yourself endeavour of Pickering’s. “When you have something small like that, try your best to make it a jewel box,” he advises.

Dropping the ceilings in the entry and dining nook of designer Josh Pickering’s Dallas apartment visually lifts the living room ceiling. “Tricks like this and adding the high-gloss blue allowed us to create a loftier-feeling room while working with the original ceiling height,” says Pickering. In the entry, a drop-leaf table (that seats up to 10!) acts as a console table; above, a pencil drawing depicting the works of Borromini and a map of Rome, by Pickering himself

An 18th-century Baltic mirror hangs above the custom-carved mantle; the benches were designed by Pickering and made in New York

Light pours into the home’s dining nook by way of Larsen drapery, for which the designer had a custom living room paint color created. “I wanted to get faint undertones of apricot in the ivory color so it would glow at sunset,” he says. Also in the space are Louis XVI antique dining chairs and a Saarinen tulip table

“She thinks she owns the place!” says Pickering of the couple’s Havanese, Tippi, who sits on a 19th-century Russian Neoclassical bleached mahogany chair

The entry reflects Pickering’s main source of inspiration: a New York City apartment. Velvet-upholstered walls are punctuated by brass sconces and a ceiling fixture from Visual Comfort. “As with all of the hardware in the apartment, I like that the brass patinas over time, and adds a sense of age that fits well in the building,” the designer notes

Dropping the ceilings in the entry and dining nook of designer Josh Pickering’s Dallas apartment visually lifts the living room ceiling. “Tricks like this and adding the high-gloss blue allowed us to create a loftier-feeling room while working with the original ceiling height,” says Pickering. In the entry, a drop-leaf table (that seats up to 10!) acts as a console table; above, a pencil drawing depicting the works of Borromini and a map of Rome, by Pickering himself.

Pickering’s talent shines in the edit of art and furnishings, a skill no doubt lifted from his former boss. You’ll find Louis XVI dining chairs pulled up to a Saarinen tulip table; a custom Calacatta marble-topped coffee table alongside Mrs. Williams’s upholstered “Bunny” armchairs; a pair of Russian Neoclassical bleached mahogany chairs, circa 1830; a multimedia composition by Frantisek Janula from the Paris flea—all perfectly layered. Though symmetry was top of mind, the designer’s approach was relative. “You have to throw it off by adding varied or interesting pieces,” he points out. “It’s all about finding things that create and tell a story.”

This article first appeared in Architectural Digest US

1970s nostalgia takes over the interiors of this Moscow apartment